LED displays vs. projection screens, what are their differences? 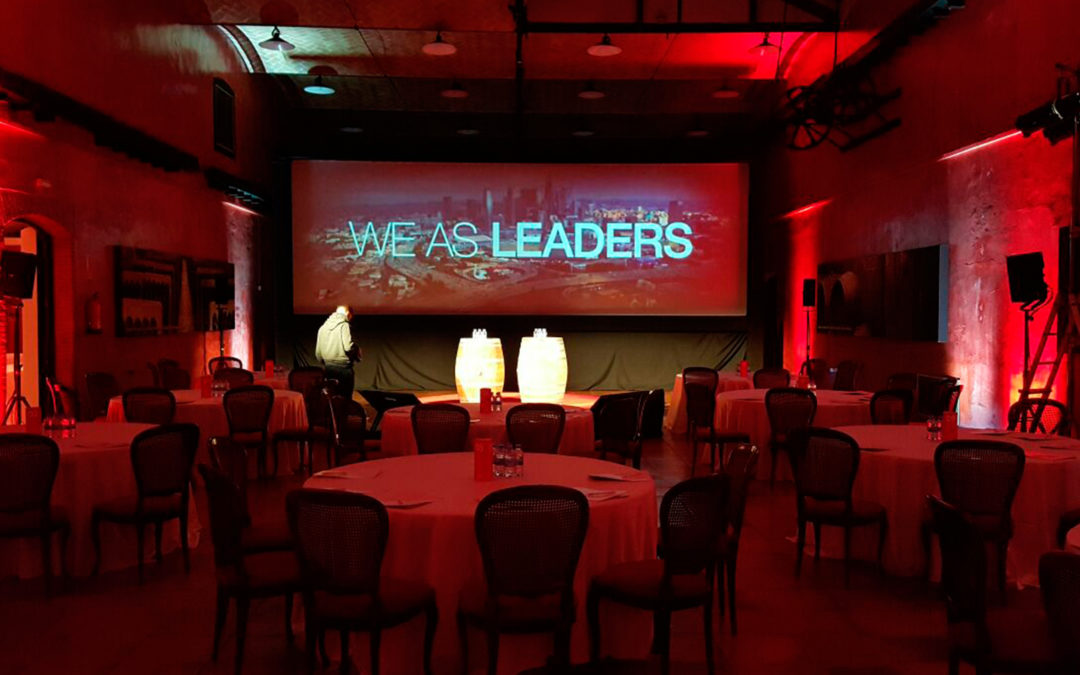 We all want our event to be perfect, just as we imagined it, that visitors have a good impression and a unique experience and that they remember our brand. To make the event attractive to others, audiovisual elements such as screens are a very good option to attract the attention of the public. There are several options, although two of them stand out: LED displays and projection screens.

Both, LED walls and projection screens have unique characteristics and choosing one model or another will depend on the different needs we have. In the following, we explain the characteristics of each one of them.

What are LED displays?

LED displays are electronic devices made up of a large number of LEDs that allow data, information, images or videos to be displayed to users.

LED displays are made up of pixels that can be monochromatic (single colour LEDs), bicolour (two types of LED colours) or polychromatic based on RGB LEDs (offering red, green and blue colours). These LEDs form pixels that make it possible to display characters, text, images and videos depending on the type of screen.

Currently, LED walls are widely used in advertising for different brands, since they can display information quickly, are attractive to viewers and are easy to replace. Although its use has become common in small and large events.

This type of panels has evolved in such a way that today there are giant screens with high resolution polychromatic LED technology. These giant screens allow to reproduce any video with vivid colours in large events with a very good image quality. In addition, LED giant displays can be used both indoors and outdoors.

What are projection screens?

Furthermore, projection screens are an installation composed of a smooth surface where the result of an image is projected for the audience through a projector.

Nowadays, there are different types of projection screens. For example, we can find the tripod screens that are used in small events for a small number of people, are comfortable to carry and easy to assemble thanks to its support and quite economical. Another type of projection screens are those known as roll-up screens which, although they are a little larger than the previous ones, are also easy to install and are mainly used in small events. Customized projection screens are also well known, which are more focused on medium or big events. This type of screen is usually large and offer a high-quality image, are very impressive for the audience and enhance the audience experience at events. Sometimes they require rigging or mounting structures for audiovisuals if they have to be flown.

Although both screens are widely used by companies that want to hold an event, the truth is that there are certain characteristics that differentiate them. Below are aspects that we can find different if we buy or rent a LED display or a projection screen.

This difference is due to the fact that the projector is based on a backlighting principle that measures the intensity of the light source on a flat surface and the LED display uses a direct illumination system that indicates the brightness of the display itself.

Price, one of the main differences between LED displays and projection screens

Economically speaking, the wear and tear of projection systems is greater than LED displays due to the need for constant maintenance and replacement of its components to keep the projector in good condition. On the contrary, LED screens require a higher initial investment, but as they are made up of modules, they can be easily and quickly fixed using cheaper components.

In the short term, LED displays require a higher initial outlay, but in the long term they are more economical since they do not need to be as strictly maintained as projection screens.

Their ability to withstand light, a feature that differentiates LED displays from projection screens

Although the resolution of LED displays is evolving very fast, projection screens usually have a higher resolution in relation to the reproduction area. However, their surface area is limited since the projector is used in places where there is no direct light, which limits their use.

Weight of the screen

When organizing an event, we must know the number of people who will attend and take into account the size of our screen in relation to this data. For example, in small events, a monitor between 50 and 75 inches or a tripod projection screen is more than enough.

In this aspect, projection screens are much lighter than LED displays due to the composition of each screen. For this reason, if a support structure is needed, it will be simpler or less equipment will be needed to support a projection screen.

Their ability to withstand bad weather conditions, another fundamental difference between LED displays and projection screens

One of the features of LED displays is that they are able to adapt to bad weather conditions, which is not the case with projection screens.

The generation of shadows on screens can be annoying for the person who is viewing it.

In this aspect, projection screens may have a disadvantage compared to LED displays. Depending on the characteristics and height of the room of the event and the possibility or not to raise the screen or perform a rear projection (projection from behind the screen), the speakers or elements on the stage could generate shadows on the projection surface. This would not occur with LED displays.

Adaptability to project on any surface, a key difference between LED displays and projection screens

Projection screens can be adapted to any surface and are much more recommendable in this sense than LED displays. In addition, they are ideal for video mapping, which is a visual technique that consists of projecting images onto surfaces such as buildings, with the aim of creating effects and animations so impressive that they seem to come to life.

We can see that there are significant differences between the two displays and depending on the event or its purpose is better to use one or the other. For example, if you are going to make an outdoor event in the morning it is better to use LED displays because they withstand sunlight or bad weather, while if what you want is to make a small event with 25 people in a closed room at 9 pm and rent screens for a day, it is recommended to use projection screens, since they are initially cheaper, easier to transport and hang if needed.

At Octo Event Productions we offer the best equipment so you can provide your event with the best quality. Do not hesitate to contact us if you want your event to be in the best hands!